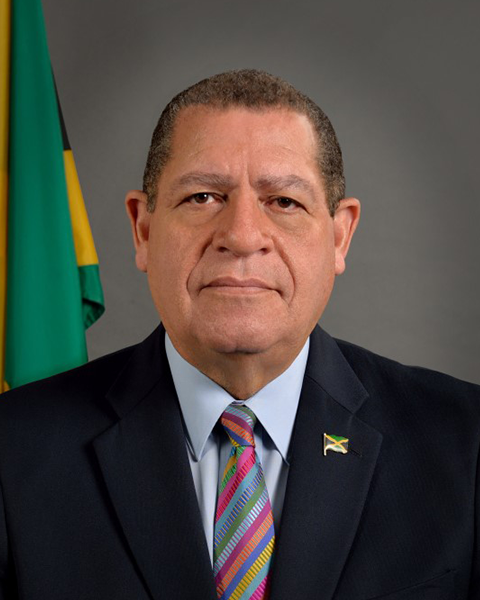 Minister of Transport and Mining

Audley Shaw was born in Christiana, Manchester on June 13, 1952.

He attended the Christiana Leased Junior School, Knox College and Holmwood Technical High School in North East Manchester.  He first worked with the Jamaica Milk Products as a Laboratory Technician.  He then worked with the Jamaica Movement for the Advancement of Literacy (JAMAL Movement) as Area Literacy Officer for North East Manchester and as Zone Officer for St. Andrew.

In 1981 Mr. Shaw graduated from Northern Illinois University (NIU) with the Bachelor of Arts and Master of Arts Degrees in Journalism with graduate studies in Marketing, Finance and Public Relations.

Mr. Shaw joined the Chicago Office of Burson-Marseller (a Public Relations Consultancy firm) in 1981 as Client Executive, and later put that experience to work when he joined the Jamaica National Investment Promotion Limited (JNIP) later named JAMPRO and now renamed Jamaica Trade and Invest, as Director for Public Relations and Advertising.

Between 1983 and 1986 Mr. Shaw was responsible for JNIP’s Marketing and Overseas Offices.  This gave him responsibility worldwide with offices in the United States, Canada, Japan, Hong Kong and the United Kingdom.  During this period many new investments came to Jamaica, employing thousands of people all across the country.

In 1986 Mr. Shaw resigned his position with Government and became a Merchant and Marketing Consultant.  In widening his scope to the political sphere he joined the Jamaica Labour Party in 1987.

During his tenure as Minister of Finance, which saw the world’s worst recession since World War II, among the highlights of policies implemented by him was the Jamaica Debt Exchange – an innovative debt management strategy which has been hailed by the IMF and other multi-lateral institutions. He also introduced a fiscal responsibility framework for Jamaica which includes legislative criteria to promote accountability and transparency in the financial affairs of the country.

Following the JLP’s loss in the December 29, 2011 general elections, Mr. Shaw was appointed as Shadow Minister responsible for Finance, Planning, Growth and Economic Development on January 19, 2012.

In 2013 Mr. Shaw was conferred with Jamaica’s national award of the Commander of the Order of Distinction in the field of public service.

In 2014 he was appointed as Shadow Minister responsible for Finance and Planning.

In the General Elections of February 25, 2016 Mr Shaw was re-elected Member of Parliament for North East Manchester for a sixth term and  re-appointed Minister of Finance and the Public Service under the JLP administration.