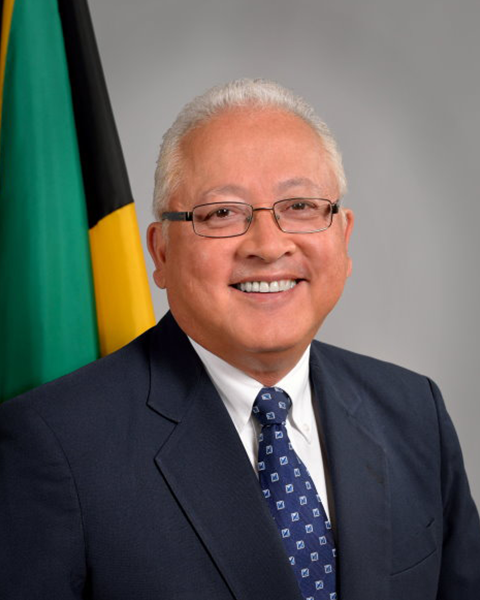 The Honourable Delroy Chuck was first elected in 1997 at the age of 47, as a Member of Parliament (MP) to represent the Constituency of North East St. Andrew.  In 2011, when the Jamaica Labour Party (JLP) won the General Elections, he enjoyed a short stint in office as the Minister of Justice.  In February 2016, Mr. Chuck was once again assigned to the portfolio with the mammoth responsibility of ‘providing a law-abiding society with an accessible, efficient and fair system of justice for all’ – no doubt to continue where he had left off.

He has worked steadily at various levels of the political and governance systems. With his mantra over the formative years ‘The brave may fall but never yield’, Mr. Chuck’s commitment and dependability can be seen in the many areas he served – Research Director, Committee on Capital Punishment, Jamaica, 1979; the Chairman, Penal Reform Committee, Barbados, 1980; University nominee, Committee on Constitutional Reform; Opposition Spokesman on Justice 1997 – 2007; Speaker of the House of Representatives 2007 – 2011.

Over the years, Mr. Chuck also served as a Teacher in Mathematics, Senior Lecturer in Law, columnist for the Gleaner newspaper, and commentator on social, political, economical, constitutional and legal issues.

Armed with his wealth of experience and extensive knowledge, it is in the area of the judiciary and the legal system that Mr. Chuck found his passion and niche thereby distinguishing himself as an Attorney-at-law since 1982. He was consultant on the Judicial System and Legal Aid in Jamaica, the author of many published papers on law and crime as well as two (2) books “Should We Hang” and “Understanding Crime”.

Minister Chuck brings a vibrant and pragmatic energy to the Ministry of Justice and his main focus is to ensure that cases are expedited within a timely manner from the present five (5) years and more, to less than three (3) years by 2020.

A graduate of Kingston College where he served as Deputy Head Boy, he won a scholarship to the University of the West Indies (UWI), Mona Campus, where he read for and received an honours degree in Special Mathematics. His hard work and keen attention to detail paid off when he became the Jamaica Rhodes Scholar in 1973. He went on to St. Catherine’s College at the University of Oxford, England, where he read Law.

Minister Chuck is the husband of Gloria and father of four daughters; one grandson and three granddaughters. He enjoys tennis and likes to read and listen to music in his quiet time or hang out with friends of his choice.