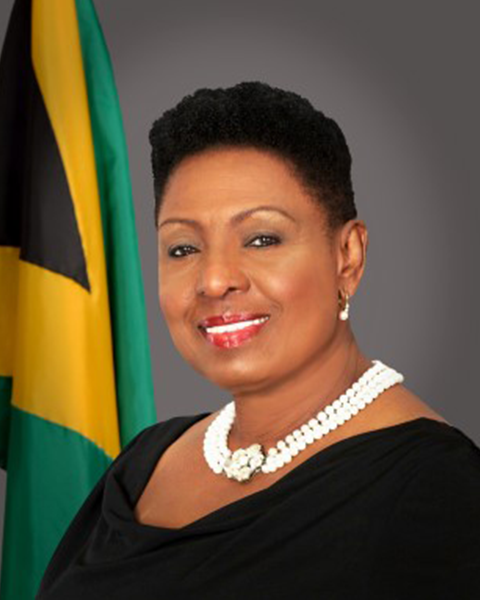 The Hon. Olivia ‘Babsy’ Grange MP, CD, has been the Member Parliament for St. Catherine Central since 1997.

She was appointed Minister of Information, Youth, Sports & Culture, with responsibility for Women and Gender Affairs, Entertainment, Community Development and Special Projects in 2007.

She also served as Minister of State in the Office of the Prime Minister 1985-1989; Government Senator and Parliamentary Secretary for Information and Culture 1983-1985.

In 2015, Ms. Grange was awarded the Order of Distinction, in the rank of Commander (CD), for her contribution to the Jamaican Music Industry, Cultural Development and Public Service.

In June 2009, she had the distinction of being appointed the Caribbean Community’s (CARICOM) first Champion for Culture, with responsibility for advocating, among other things, capacity building for cultural industries, cultural institutions and individual artists.

Minister Grange has had a long career as a cultural activist, working at the grassroots level in developing and managing talent. She is an artist, director, event planner and an ardent supporter and promoter of Jamaica’s creative and cultural industries. She is also a pioneer contributor to the development of the Reggae and Dancehall Music Industry in Jamaica, Canada and the United States.

As a founding member and Director of the Jamaica Association of Composers, Authors and Publishers (JACAP), Ms. Grange has been instrumental in introducing policy initiatives in Jamaica to support the development of the cultural industries and advance “brand Jamaica” in the international market.  She also assisted in developing the Jamaican Copyright Legislation.

She co-founded Contrast, Canada’s first black community newspaper and was the Chief Executive Officer of Specs Limited and Spec-Shang Music.

Minister Grange has a long career as a community activist and politician committed to the promotion of youth and women’s affairs with a particular focus on job creation and improved health care.

She is the proud mother to one daughter and has three grand-daughters.